Whale watching in the Pacific waters of Drake Bay and Caño Island and get close encounters with whales and dolphins from the comfort of our boat, and – in season and with a little luck, thrilling sightings of humpback whale mothers and their calves. Whale watching seasons are December – March and July- November.

Although whales watching are seasonal visitors to this waters, dolphins are common residents in this area.

Every adventure on the ocean is different and interesting. Sometimes we encounter large pods of dolphins close to shore, and other times we find ourselves offshore observing pods of more than 1000 Bottlenose, Spotted, Common and/or Spinner dolphins.

You might have the opportunity to watch a new Humpback whale mom teaching her whale baby to breach or see several Humpback whales males compete for female whale attention.

The whale watching tour departs at 8 am and returns at 12 pm, and includes beverages, fruits, and a naturalist guide.

NOTE: Our fleet of boats used in the whale watching tour is fully insured, with roofs, VHF radios, compass, first aid kits, and mandatory life vest s for the passengers. 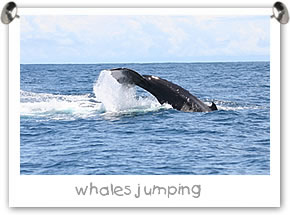 What is a dolphin?

Dolphins are small whales. Although they look like big fish, dolphins are mammals. They breathe air and have live young and feed them with milk when babies. They are among the most intelligent creatures on earth.

Is a dolphin a fish?

What are their feeding habits?

Bottlenose dolphins are skilled hunters that eat a variety of foods, including fish, squid,
octopus & eels. They may consume about 8 kg of food a day. Dolphins do not chew their prey; they generally eat it head first & whole.

What is their breeding cycle?

Female dolphins generally begin to breed when they are between 8 & 14 years of age, in males, sexual maturity is reached by the age of 10 years-. Gestation takes about 12 months, & a single calf is born, usually in the warmer months.

How do we recognize the dolphins in Drake Bay? 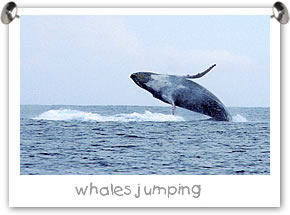 Dolphins can be individually recognized by unique features on their dorsal fins such as nicks & scars. These scars may arise through fighting & at times, sharks & close encounters with boats! Researchers are able to recognize individual dolphins by photographing their dorsal fins, which is similar to our fingerprint.

What species of dolphins can we see around Drake Bay waters?

Based on our seven years experience dolphin watching around Drake Bay waters we consider that there are around 6 resident species that surround these waters, although some of them are occasionally seeing.

How fast can dolphins swim?

The average dolphin swims at a rate of between 10 and 15km per hour. If they are being chased, they are capable of swimming much faster, even as fast as 40km per hour!

What do dolphins hear?

Dolphins use echoes to locate objects in the water. They send out a series of clicks to find out an objects size, shape, and location. Dolphins can tell a shark from above using this method, called echolocation or sonar.

How old can dolphins be?

What is the biggest dolphin? 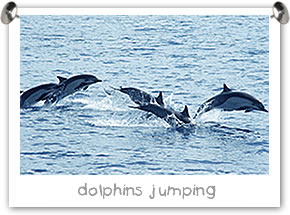 The Orca, or Killer Whale, is the biggest dolphin. The largest males can weigh over eight tons and be as long as 10 meters (over 30 feet!).

“I just wanted to send a letter of thanks to the Corcovado Expeditions crew who took out my 2 parents and myself on February 5, 2007.  This was the best possible experience of nature I have ever had the chance to encounter.  I loved that the crew had a genuine love and knowledge of the creatures we were seeing.  I was impressed that an actual marine biologist was there to educate us first and that she allowed us to interact with the dolphins and the whales in such a way that was safe for both us and the dolphins and whales we saw and reinforced that loving wildlife doesn’t mean handling wild animals trying to make them your pet.

I did not feel like this trip was a bunch of commercialized planned events, and as the things we saw were once in a lifetime.  I have always though of myself as a lover of nature and have always felt a great obligation in preserving our ecosystem, but this trip brought about a whole new feeling of joy in all that our world has to offer.  Anyone can go to a park and see trained animals doing tricks on the queue of their trainers, but to see nature in its pure form brings a whole new respect for the animals in their natural habitat.

Thanks a million, Elizabeth Morris”

Come and experiment the best of the whale watching and Dolphin watching tour in Costa Rica!