Corcovado National Park protects major habitats including a montane forest, which covers more than half the park; a cloud forest, located in the highest region, richly populated by oaks and tree ferns; swamp forests, flooded practically year-round; a Yolillo forest, predominated by palms; a mangrove swamp, located on the estuaries of the Llorona, Corcovado and Sirena Rivers; and a freshwater herbaceous swamp.

The park is home to some 500 species of trees-equivalent to a quarter of all the tree species in Costa Rica. Some of the larger trees include the purple heart, guanacaste, ceiba, shoe maker tree, cow tree, espavel and Royal mahogany wood.

Corcovado National Park contains approximately 140 species of mammals, 367 birds, 117 amphibians and reptiles, 40 types of freshwater fish, and it is estimated that there are some 6,000 types of insects. It is common to see large herds of white-lipped peccary, as well as howler, spider white faced, and squirrel monkeys. The park is sanctuary to the largest population of scarlet macaws in the country, many of which are easily accessible from the Sirena station or along the beach. Other species of birds found here are the king vulture, white hawk, short-billed pigeon, orange-chinned parakeet and bronze-tailed sickle bill.

In addition, the Corcovado National Park protects several endangered species including large cats and reptiles. Moreover, it corcovado is home to several species of birds, which are either endemic or whose distribution is very restricted. 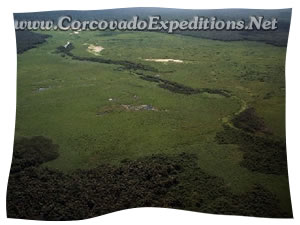 Corcovado is unquestionably the most raw, challenging and rewarding park in Costa Rica. It truly is the mother of all parks. The Park has four ranger stations, Los Patos, Sirena, San Pedrillo,Los Planes and Carate. There are three routes you can use to get into Sirena, but regardless of which route you take it will demand at least 6-8 hard hours of hiking. The route from Carate is almost all along the beach. Very little shade is present and the sand often leaves hikers with blisters for days to come. The interior route from Los Patos, while much more mountainous, is shaded and more naturally beautiful.

There also tends to be much more wildlife along this route. You can also enter or depart Sirena Staion via the San Pedrillo Ranger Station, which is situated north along the Osa Peninsula coastline. However, you can only access this trail between December and April. During the other months the rivers that empty out into the ocean are simply too high to cross. It will take about 9 hours to complete the hike, and all but 7 hours of it are along the beach. The inland portion is nearer to the San Pedrillo station. The ideal scenario would be to enter from Los Patos and depart via Carate, or visa versa. Either way, the main goal is to visit Sirena and spend a few days within the Park’s interior.

Visit the corcovado national park can be one of the most exiting way to experience the best costa rica at natural!.